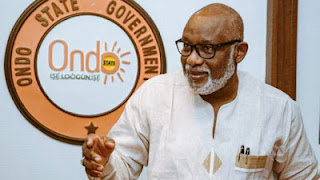 Governor Oluwarotimi Akeredolu of Ondo State has rejected bags of rice sent to the state by the Federal Government as palliatives. It was gathered that most of the 1800 bags received by the state from the Ministry of Humanitarian Affairs and Disaster Management were not fit for human consumption.

The 1,800 bags of rice and vegetable oil were sent to the State by the Federal Government as part of measures to cushion the effect of COVID-19 on residents. This is coming days after Governor Seyi Makinde of Oyo State cried out over the development when he rejected the expired 1800 bags of rice received from FG and ordered the immediate return of the palliatives.

Similarly, Governor Akeredolu was said to have expressed displeasure on the situation when he received the palliative items at the Government House, Alagbaka, Akure, following which he ordered the rejection. According to the Secretary of the State Palliatives Committee, Mr Alex Kalejaiye, some of the bags of rice had expired and were no longer fit for consumption.