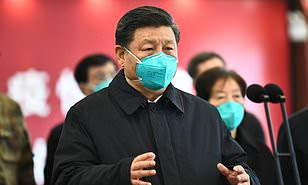 Lawyers in the US have launched a landmark legal action to sue China for trillions of dollars over the coronavirus pandemic, accusing its Communist leaders of negligence for allowing the outbreak to erupt and then covering it up. The class action, which involves thousands of claimants from 40 countries including Britain and the US, was filed in Florida last month.

A second case launched this month on behalf of healthcare workers accuses China of hoarding life-saving medical supplies. The legal challenges – set to be followed by another from Israeli human rights lawyers who specialise in suing states for terrorism – ramp up the pressure on President Xi Jinping to account fully for his country’s actions.

There are calls also for the United Nations to set up an inquiry to establish how the coronavirus broke out in the city of Wuhan and then spread so fast around the world. This follows a warning last week   from Foreign Secretary Dominic Raab, who is running the Government while Boris Johnson recovers from the virus, that it could not be ‘business as usual’ after the crisis.

‘We will have to ask the hard questions about how it came about and how it couldn’t have been stopped earlier,’ he said. China faces accusations that it suppressed data, blocked several outside teams of public health experts and silenced doctors trying to warn about the epidemic when it broke out late last year.

It has also not been established if the source of the virus was a market selling live exotic animals, as first claimed, or if it is linked to research laboratories in Wuhan. The US legal claim was launched by Berman Law Group, a Miamibased firm that employs the brother of Democratic presidential candidate Joe Biden as an adviser.

Chief strategist Jeremy Alters said: ‘China’s leaders must be held accountable for their actions. Our goal is to expose the truth.’ Three years ago, the firm won a $1.2 billion (£960 million) case against China over the manufacture of defective building materials. Lawyers argue that although nations have legal immunity, there are exceptions under US law for personal or property damages and for actions abroad that impact on businesses in their own borders.