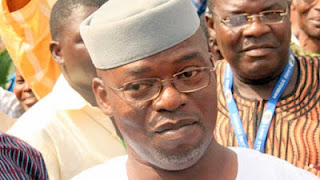 The All Progressives Congress (APC) has suspended Segun Oni, former Govenor of Ekiti State and immediate past Deputy National Chairman (South) of the party, indefinitely.

According to a letter by the party’s executives in Oni’s Ifami Ward II, Ekiti, dated May 1, the decision was taken after Oni, accused of anti-party activities, refused to appear before them to clear his name.

"Subject to Article 21 Subsections I, II and X of the APC constitution 2014 as amended, we the undersigned executive members of the APC hereby suspend you indefinitely from our great party, based on your refusal to honour our invitation for investigation and fact finding into the allegation of anti-party activities levelled against your person by the members of our party," read the lettter, signed by Chairman and Secretary of Ifaki Ward II, Shina Akinloye and Ogunyemi Taiwo, respectively, as well as 24 other executive members in the ward.