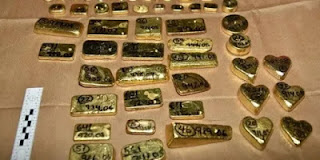 The shipment was seized last month but judicial officials have now allowed the National Crime Agency (NCA) to hold it under the Proceeds of Crime act. The gold is now being treated as money laundering in an investigation by the Cayman Islands with the help of the NCA.

"We believe that this shipment was linked to drugs cartels operating out of South America,” NCA Heathrow branch commander, Steve McIntyre, said of the news. "Working with partners overseas and in the UK we were quickly able to identify it and stop its onward movement."