Pakistan Plane Crashes Killing Over 100 Passengers On Board 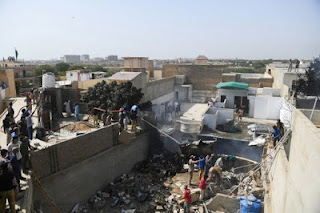 A passenger plane belonging to state-run Pakistan International Airlines (PIA) has crashed near the southern port city of Karachi, killing all 107 passengers and crew, the city’s mayor has said.
The PIA flight PK8303 was on a routine domestic service between from Lahore to Karachi, and was almost at the end of the 90-minute flight when it crashed on the approach to Karachi’s Jinnah International Airport. The Airbus A320 aircraft was carrying 99 passengers and eight crew members when it came down among houses, sending plumes of smoke into the air that could be seen from some distance away.
Rescue workers and local residents were seen pulling people from the debris, as firefighters tried to put out the flames. “I heard a big bang and woke up to people calling for the fire brigade,” said a Karachi resident, Mudassar Ali. Pakistan Prime Minister Imran Khan said he was “shocked and saddened” by the crash, tweeting that he was in touch with the state airline’s chief executive.
The disaster comes as Pakistanis across the country are preparing to celebrate the end of Ramadan and the beginning of Eid Al-Fitr, with many traveling back to their homes in cities and villages and only days after Commercial flights resumed after planes were grounded during a lockdown over the coronavirus pandemic.
FOREIGN NEWS