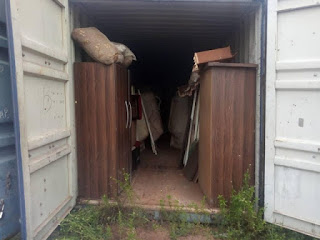 The Jasper Ndubuaku-led Imo State Committee on the Recovery of Moveable Assets belonging to the State Government, acting on a tip off, discovered a massive warehouse on Friday afternoon.


The facility, located along Aba Road, is alleged to be belonging to Nkechi, wife of former Governor, Rochas Okorocha. It was gathered that it took spirited intervention to stop the youths from setting the entire warehouse ablaze.

The discovery of the warehouse follows the sealing off of an estate also allegedly owned by Nkechi. The property is located in the Akachi area of Owerri, the state capital. The blocks of flat and bungalow were allegedly built with state funds and proceeds of corruption.