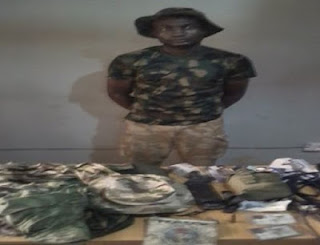 The operatives of the Ogun State annex of the Inspector General of Police Intelligence Response team (IRT) has confirmed the arrest of a robbery suspect identified as Egbeke Ifeoluwa. The suspect who usually operates in Army Uniform was arrested on Sango-Ijoko Road in Ogun State.

After his arrest, Ifeoluwa who was the leader of a robbery gang that specialised in one-chance robbery in different parts of Ogun State and nearby states revealed that their operations are been carried out at anytime of the day.

Ifeoluwa, 25, wore Army uniform to intimidate the public and scare away law enforcement agents. Following the gang’s operations, road users and residents gave intelligence report to the IRT annex in Sango on the nefarious activities of the gang. Based on the intelligence report, the IRT Commander, Deputy Commissioner of Police Abba Kyari, directed the Ogun State annex to arrest the hoodlums.

The Nation reports that the operatives swung into action and saw a commercial bus driver in an Army uniform plying the road. They stopped the bus with number plate XV 14 AKD and the driver, who was later identified as Egbeke Ifeoluwa, the wanted gang leader, was nabbed. His colleagues, however, escaped.