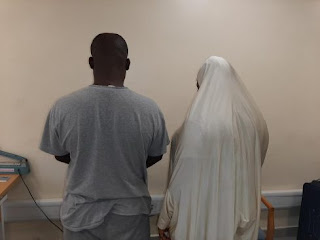 A 54-year-old woman, Sulaimon Kudirat Aduni and 45-year-old Adindu Obinna Hycinth have been arrested by operatives of the National Drug Law Enforcement Agency (NDLEA) at the Murtala Muhammed International Airport (MMIA) on charges of drug trafficking.

Kudirat who was on her way to London when she was nabbed has excreted 28 out of the 60 wraps of cocaine she swallowed, while Adindu has excreted 93 wraps.  The widow disclosed that she joined the drug trafficking gang after facing a hard time in her clothing business. She further revealed that she was contacted by one of her friends Bunmi who stays in London. Bunmi reportedly sent over one Mukaila to help her swallow the drugs.

The NDLEA Airport Commander MMIA, Garba Ahmadu said Aduni was apprehended after she developed complications and vomited two wraps resulting from irritation and stomach discomfort.  Ahmadu said: “She was arrested on October 26, 2019, during outward clearance of passengers. She was to board Virgin Atlantic flight to London.

On October 27, 2019, she developed some complications and vomited two wraps resulting from irritation and stomach discomfort. . During preliminary interview, she admitted that she ingested a total of 60 wraps of cocaine. She has so far excreted 28 wraps. She coughed intermittently before vomiting and fainted in the process. She was promptly rushed to the Lagos State University Teaching Hospital (LASUTH). After she was certified stable, the suspect was taken back to custody. .

She is being kept under strict observation for possible excretion of the remaining 32 wraps.” Hycinth on the other hand said he got into the crime because someone stole his N6 million and he was desperate for cash. He further revealed that he was promised €3,000 if the trip to Frankfurt was successful.