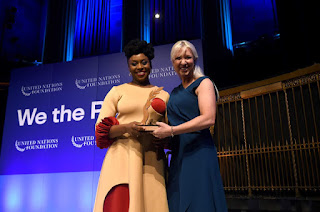 The United Nations Foundation on the 20th of November, 2019 honored Chimamanda Ngozi Adichie, amongst other global leaders in its annual awards ceremony.

This year’s ceremony held on the eve of the United Nations’ 75th anniversary and called We the Peoples to honor the founding ideals and vision articulated in the UN Charter. The honorees – advocates, business leaders, UN humanitarian workers, and more – strive for a more equitable and sustainable world.

The award-winning writer was recognized with a Global Leadership Award for her work using literature and storytelling to connect with people across generations and cultures on issues of gender and racial equality and being a leader on the frontlines of global progress. This comes after Adichie’s Half of A Yellow Sun was recently named in BBC's 100 Novels that shaped our world.

From transforming the global food system to defending human rights to using literature to connect with individuals on issues of equality, the We the Peoples honorees continue to make invaluable contributions to the world. The foundation recognizes that their work brings to life the goals enshrined in the UN Charter – to promote peace, justice, and fundamental human rights for all people.

This year’s ceremony included remarks from UN Deputy Secretary-General, Amina J. Mohammed. Other honorees at the ceremony were Mary Robinson, Chair of The Elders and Former President of Ireland, Gunhild Stordalen, Chair of the Stordalen Foundation and Founder of EAT, UN staff members who have worked on the frontlines of crisis response, amongst others