Popular Ekiosa market in benin razed down by fire 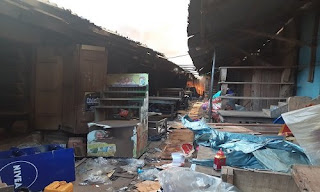 Popular Ekiosa market was on Sunday razed without a fire-fighting truck on ground to put out the fire. The Commander of the FFS, Bidemi Jeremiah, during a street march to announce its presence in the state, said the agency was ready to tackle fire emergencies.

But throughout the four hours that fire razed the Ekiosa market, men of the FFS or the Edo Fire Service failed to respond to distress calls. The fire started at the Ekiosa market from the goat line at about 11am and lasted for more than four hours, spreading through the market.

A five storey building housing the Edo Property Development Agency (EDPA) was also razed. Owners of buildings closed to the market, including a petrol station, battled to stop the fire from reaching their houses. They poured water and knocked out areas where the fire had already affected. Some traders were forced out of their shops to avoid being caught in the fire.

It was gathered that men of the Edo State Fire Service were chased away by angry youths and traders when they came with one truck at about 12:30pm. The youth said the Fire Service officials did not respond to their distress call, claiming there was no water, but rushed to the scene when they learnt fire was spreading to a new shopping mall and the EDPA building.

There was jubilation among the crowd when they saw fire at the top floor of the EDPA building. Several cars belonging to the Edo State Government on the premises of the EDPA were destroyed by the angry youth. Security personnel, including soldiers, were drafted to the scene to forestall a breakdown of law and order.

Robbers, pick-pockets and other criminals had a field day, as they stole goods brought out from the raging fire by traders as well as phones of sympathisers. A teenager, who tried to retrieve his phone from a pick-pocket, got his feet cut off, as the hoodlum escaped into the crowd. The teenager was rushed to hospital.