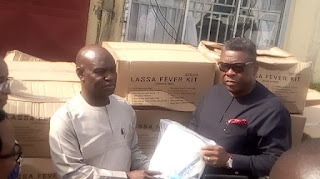 The Niger Delta Development Commission, NDDC, has donated Lassa fever protective kits and drugs to support the Delta State Government in its efforts to check the menace of disease in the state. Presenting the medical kits and drugs to the State Government at the Ministry of Health in Asaba, the NDDC Acting Managing Director, Gbene Dr Joi Nunieh, said the Commission was concerned about the outbreak of Lassa fever in the region.

Dr Nunieh, who was represented by the NDDC Director Health, Education and Social Services, Mr. Peter Edieya, said the Commission was concerned about the well-being and healthcare of the people of the Niger Delta:

Receiving the medical kits and drugs on behalf of the Delta State Government, the Commissioner for Health, Dr Mordi Ononye, thanked NDDC for the intervention, which he said came at the right time.

Dr Ononye confirmed the detection of two cases of the Lassa fever in the State recently and regretted that one of the victims died, while the other patient, a Youth Corps member, was responding to treatment.

The commissioner affirmed that the Delta State Government had opened an isolation ward at the Federal Medical Center in Asaba, where the residents of the state would be attended to instead of going to Irrua in Edo State.


Dr Ononye declared the willingness of the state government to collaborate with NDDC and other agencies to check the spread of the disease, adding: "We are hopeful that the health sector in the state will benefit a lot from NDDC in the near future."