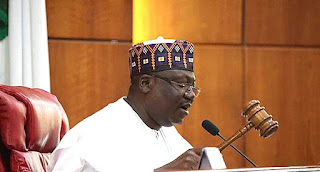 To the senator, it is time to rejig the set up because of the resurgence of insecurity, criminality and killings across the country. “The security system has not been working efficiently and effectively, we have to do something about it,” Lawan told reporters in Abuja on Monday ahead of today’s resumption of senators from their end of year recess.

He spoke against the backdrop of a myriad of security challenges at the weekend. On Sunday night, gunmen killed 15 people in Plateau State. Also on Sunday night in Kaduna, gunmen suspected to be kidnappers attacked a vehicle carrying travellers after they alighted from a train at Raigasa station.

They kidnapped two people. By yesterday morning, they called the family to demand N20 million ransom. Benue State Governor Samuel Ortom alleged that herdsmen shot at him at his farm. Lawan stated on Monday that “the Senate will take a position on how security in this country should be. I believe personally that we should restructure the security architecture.

“The present system does not appear to give us the type of outcome that we need. Whether it is the federal, states, local governments or traditional rulers, the most important thing is to secure the lives and property of Nigerians and we would do that.”

He said a major agenda of the upper chamber on resumption of plenary would be how to ensure adequate security for Nigerians. He lamented that the rise in bandits’ and terrorists’ attacks have destabilised many communities and loss of precious lives.

“What we have in mind and what we have before us is what is so important for Nigerians. First and most importantly is to look into the issue of security that is bedeviling this country.

“Apparently and obviously, all hands must be on deck to ensure that we bring back a better security situation that we had before. Presently the story is not good.

“In many areas we have so much happening that is destabilizing our communities and killing of people.