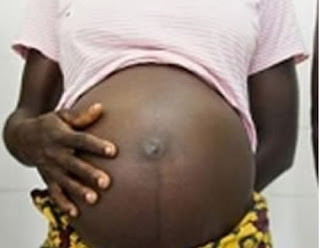 After suffering three miscarriages and being diagnosed with polycystic ovary syndrome, a woman and her husband made a last-ditch attempt to have a child - only for a hospital mix-up to leave them not wanting the baby.
Actor, Tunde Owokonira welcomes 2nd child with wife


The anonymous father, thought to be American, posted his dilemma on Reddit, explaining that the couple decided to pay a surrogate 'lots of money' to have a child. However a mix-up at the sperm bank meant that the child that was born wasn't her husband's, according to the post.
Nnamdi Kanu places N1m bounty on overseas traveling schedule of South-East governors

Taking to the discussion site in a now-removed post, the new father asked whether it was wrong for him to want to give the baby up. 'We paid lots of money to a surrogate in order to have our own child together. The surrogate was a nice lady who took care of her body and we got along very well,' the man began. He continued that he and his wife were 'excited' but when the baby was born they realised 'something was wrong.'
Babatunde Fowler Queried By Aso Rock

'The baby had Asian features, black hair and brown eyes when we are both white, blonde folks with blue eyes. 'We immediately brought up the issue with the doctors and asked for a DNA test. I am not the father,' he added. He added that he and his wife are 'devastated' and that the surrogacy and sperm bank did an investigation and told the pair that there was an 'extremely rare' mix-up and offered the couple financial compensation.

'We don't care about race, we are just upset that the baby wasn't both of us. Am I the a**hole for wanting to take legal action against the agency and not keep the baby?' he asked. More than 4,000 people commented on the post while it was still on the site. One person said: 'Wow this is stunningly sad.'

Another wrote: 'As a man, I would feel hurt. I would feel partially emasculated. But if this is something I wanted, and my wife wanted, I wouldn't waste the chance given to us simply because of the organisation's f*** up.' A third added: 'You brought this child into the world, you now have the responsibility to take care of it.'