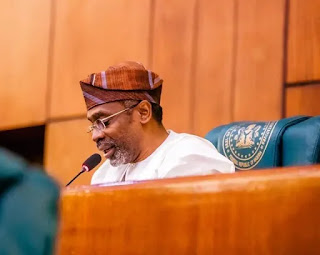 The Speaker of the House of Representatives, Femi Gbajabiamila, has come under attack over his recent threat to report the service chiefs to President Muhammadu Buhari, for failing to honour an invitation to a meeting on security.

Reacting, however, the Arewa Citizens for Democracy (ACD) said the fact that Gbajabiamila could only threaten to report the service chiefs to President Buhari is an admission of his screaming incompetence.

“He is aware that he does not possess the powers he attempted to exercise over the military,” AbdulGafar Usman, President of ACD said at a press conference on Sunday in Kaduna.

Usman said instead of making trouble for the military or anyone within the security architecture, the Speaker with the other members of the House should come up with innovative ways of providing a budget that makes it possible for the military to get the equipment needed to fight terrorists.

We express our disappointment with the Speaker of the House of Representatives, Rt. Honourable Femi Gbajabiamila, who threw all the honour accruable to his person and position away to cast aspersions on the office and persons of our great nation’s security chiefs.

The Speaker, under the guise of ventilating his anger over the non-appearance of the military chief before the House, threatened to report them to President Muhammadu Buhari.

He also went ahead to castigate them not minding that these are men that have given more to Nigeria in the past five years than the Speaker can give in five lifetimes even if he lives to be a thousand years in each life.

Arewa Citizens for Democracy (ACD) is of the view that rather than throwing decorum to the dogs and embark on the ranting show he put on for the entire world, the Speaker should have search deep within himself and his institution, the National Assembly, to understand why the Military chiefs did not show up even when invited.

We make this point without prejudice to the reasons that kept the security bosses away, especially when they made it their duty to delegate worthy and competent representatives to appear before the lawmakers. We shall call the attention of the Speaker to a few some realities that he may be deliberately ignoring but which right thinking Nigerians are aware of.

We all know that there is not much that happens when the House of Representatives invites public office holders and heads of agencies to appear before them. It is often nothing but an extortion racket, something they use to blackmail the invited persons to pay bribes to lawmakers from the budget of their organizations. It is on record that even when the public officers in question do appear before the House or its committees, it is often the subordinate officers with jurisdiction for the areas of interest that eventually answer all the question being posed.

The office holder is only compelled to put in appearance to make sure he is on ground to negotiate the bribes to be paid. For a country that is battling a terrorist insurgency Gbajabiamila should have known better than trying to coax money out of the military chiefs.
In addition to monetary considerations, the other thing that makes lawmakers summon office holders to appear before them in person is usually to shore up their fledging images.

With Nigeria running smoothly under the able leadership of President Muhammadu Buhari, the lawmakers have been removed from the limelight, which is an opportunity the should have exploited to do their legislative duties.

But it seems the Speaker is unable to survive in this manner and had to go shopping for another made for television reality show that the House of Representatives has over time proven to be addicted to. Taking on the military bosses is nothing but cheap grandstanding for publicity.

The Speaker can do better and he should.

The fact that Gbajabiamila could only threaten to report the service chiefs to President Buhari is an admission of his screaming impotence. He is aware that he does not possess the powers he attempted to exercise over the military.

He bluffed and the military commanders who knew who they are called his bluff hence the face saving resort to threatening to report them to Mr. President as they were some schoolyard bullies to be reported to the Principal by a whimpering nerd. But these are security chiefs that are doing their best such that there is currently no security threat that is not been handled decisively.

We must not neglect to look at the security ramifications of what the Speaker and his colleagues wanted to do. They wanted to subject discussion of sensitive security operations to the vagaries of a political circus.

They would have of course held ceremonial session before devolving into a closed door session. The only problem is that the House has its fair share of closet Boko Haram members who will divulge details of such meetings and other security strategies to the terrorists. It will not be surprising if the pressure to have the military leaders appear to discuss their strategy is because of the losses the terrorists have suffered in recent times.

Gbajabiamila must therefore not use the House as the leaking conduit to extract and pass information to Boko Haram. The Speaker is now under obligation to clearly come out and defend himself in this matter of his recent naked dance of shame because his conduct suggests that he was the mole that many of his colleagues had hinted at in the run up to the Speakership election.

From the foregoing, it is glaring that Rt, Honourable Femi Gbajabiamila is yet to appreciate that he is no longer the minority leader, he is not even in the opposition anymore yet he behaves with all the absence of decorum that characterized that fraction of politicians in Nigeria.

He must wake up to the reality of being the Speaker of the House of Representatives and stop throwing the kind of tantrum that is not even seen among pre-schoolers. His duty includes finding practical solutions to whatever shortcomings exist, assuming he finds any, and not grandstand.

It is our fervent hope that the Speaker will rediscover the decent part of himself and meet off camera with the security chiefs to tender his unreserved apology to them. They deserve to hear it from him and there is no need to continue making a matter for public discourse of because it has potential to distract everyone from the task at hand.

Instead of making trouble for the military or anyone within the security architecture, the Speaker with the other members of the House should come up with innovative ways of providing a budget that makes it possible for the military to get the equipment needed to fight terrorists.

The parliament must also look at how to amend existing terrorism related legislation especially changes that will block foreign financing of terrorists and curtail the unwieldy influence of international organizations that are making the counter-terrorism operations difficult.