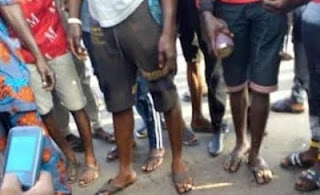 Customs officers in Oyo State have been accused of killing an okada rider. According to the news making the rounds, the officers were allegedly chasing rice smugglers in a Sienna bus when the unfortunate incident happened.

The officers had succeeded in double crossing their vehicle right at the front of Bovas Filling Station, but the occupants of the bus resisted arrests which made the officers open fire, but unfortunately, a stray bullet hit an okada rider. The report also claims the men fled the scene shortly after seeing what happened.
LOCAL NEWS