No refund for federal roads repairs, Federal Government to governors 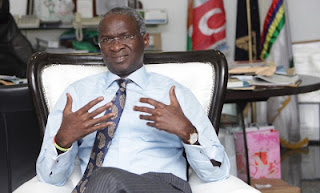 President Muhammadu Buhari has asked state governors not to fix federal roads if they will eventually demand refund for the rehabilitation.

The Minister of Works and Housing, Babatunde Fashola, made this known on Tuesday in Abuja when he appeared before the House of Representatives’ Ad Hoc Committee on Abandoned Federal Government Projects (Works) from 1999 till date.

According to the minister, the President issued the directive due to the humongous amounts being claimed by the governors after repairing federal roads in their states. Fashola said, “The states submitted a bill of almost a trillion naira when President Buhari was elected. He asked us to work out what was their entitlement and all of that.