Man Who Killed Navy Commandant Says They Were Dating And She Refused On A Promise To Give Him N2.5million 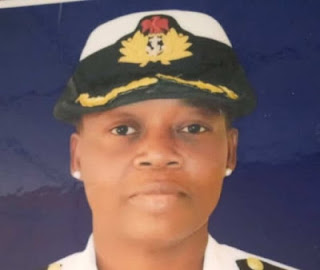 More details into the killing of Navy Commandant Oluwayemisi Ogundana, of Armed Forces Command and Staff College, Secondary School, Jaji emerged on Monday as investigations showed that she was having extra-marital affairs with her murderer.

Aside from the relationship, the murderer, one Mr Simon Bernard, who was the Chairman of the Parents Teachers Association (PTA) of the school, was sacked from the position on the orders of the Commandant, Commander Ogundana.  Vanguard gathered that Mr Bernard was also infuriated that after sacking him as PTA Chairman, the Commandant refused to pay him the sum of N2.5million which she had agreed to pay him.

Disclosing how the perpetrators of the crime were arrested, a source said they were nabbed by Provost Officers of Nigerian Air Force at the Air Provost Squadron in Kaduna. A civilian driver, from Jaji, was said to have packed a Toyota Highlander belonging to the Commander Ogundana at Air Provost Squadron Office in Kaduna owing to fuel shortage in the car and went out of the base to buy fuel.  Before coming back to put the fuel into the car and move it out, the Air Provost had laid an ambush for the civilian having gotten wind that the car belonged to a missing Navy Commander from Jaji. On his return, the civilian was arrested by the Air force and taken into custody During interrogation, the civilian driver confessed that the Highlander jeep was given to him to sell by someone in Jaji.

With the information, the Airforce launched a manhunt for the principal suspect who lives in Jaji. After several days of hunting and near misses, the main suspect, Mr Simon Bernard, who is a teacher serving in the school and one-time Chairman, Parents Teachers Association at AFCSC Secondary School, Jaji was apprehended.

During interrogation, the suspect (Mr Simon Bernard) confessed to the killing of Navy Commandant Ogundana at Angwan Loya village in Jaji. He said he was having extramarital affairs with the Commandant and stated that he killed Commander Oluwayemisi because she promised to give him the sum of N2.5million and reneged.

He further confessed that he had several confrontations with Commandant Ogundana along with other staff over her decision to have him (Bernard) sacked as the PTA Chairman of the school and he bore the grudge against her. Vanguard gathered that the recovered Toyota Highlander Jeep is currently parked at NAF Base Kaduna and that a team of Naval Police Officers from Abuja have taken the suspects into custody while investigations continue.  Commandant Oluwayemisi Ogundana was killed and dismembered; her body parts put in a Ghana Must Go Bag and dumped in a well.