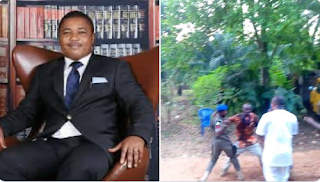 Report emanating from Anambra State says officials of the Nigeria Police Force have stormed the home of Ifeanyi Ejiofor, lawyer to the founder, Indigenous People of Biafra (IPOB), Nnamdi Kanu.

Unconfirmed report says two people have been shot dead in an attempt to capture Ejiofor, who just buried his brother few days ago. Images on twitter showed a police officer in a compound aiming to shoot, while people were protesting at the compound.

Fani-Kayode, former Aviation Minister, tweeted that he had just been informed that the home of Ejiofor, in Oraifite, Anambra state has been stormed by the police and that four people have been killed.

“Just been informed that the home of my friend and brother, Ifeanyi Ejiofor, in Oraifite, Anambra state has been stormed by the police and 4 people have been killed. Ifeanyi, who is @MaziNnamdiKanu ‘s, buried his brother 4 days ago. His family are still mourning and now this,” he tweeted.
LOCAL NEWS