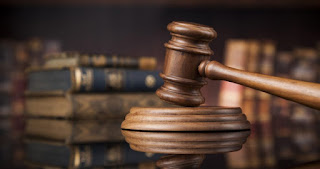 An oil thief, Abednego Ogede, who was prosecuted by the Economic and Financial Crimes Commission, EFCC and convicted in absentia by Justice Rilwan Aikawa of a Federal High Court, Lagos, on December 18, 2019, was on January 22, 2020, sentenced to 10 years imprisonment.

Aikawa had on December 18, 2019 pronounced the convict alongside a vessel, MV Shirley and a company, Sagwe International Limited, guilty of all four counts of conspiracy, illegal and unlawful dealing in 145,000 metric tonnes of Automated Gasoline Oil (AGO) brought against them.

Upon declaring the convict guilty of the charges, the EFCC prosecutor, Mr. Rotimi Oyedepo, had urged the court for forfeiture of the vessel and the company charged with the convict to the Federal Government of Nigeria. He also pleaded with the Court to empower all security agencies to arrest the convict and bring him to court for the purposes of sentencing him.
on January 23, 2020